As you’ve no doubt heard by now, it’s not just plants and animals that are becoming extinct at alarming rates. The world’s languages and cultures are disappearing too, and the pace is even worse: 11% of birds and 18% of mammals are predicted to die out by the end of the century, but a conservative estimate places language extinction at 0% (that’s about 2,800 of the world’s languages). The situation is just as grim for other expressions of culture — songs, stories, performance traditions — particularly those of Indigenous and minority peoples. International recognition of this new global crisis led UNESCO, in 2003, to proclaim a need for “urgent safeguarding” of the world’s intangible cultural heritage, including music. 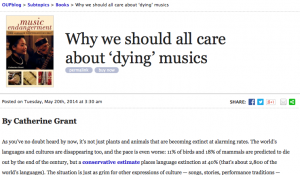 Read the full article at the OUP Blog site.

This site uses Akismet to reduce spam. Learn how your comment data is processed.